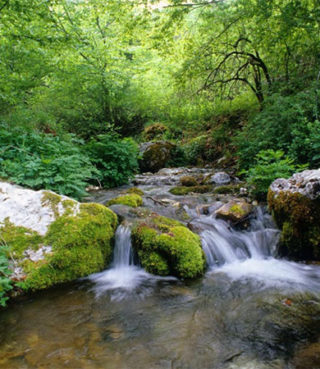 The Hotel Boracay is located in Alba Adriatica, Abruzzo, in a region called “The Green Region of Europe” since one third of its territory is considered protected area. Bears and chamois, rocky faces and forests, sweet hilly landscapes and marvelous sandy beaches: this is the Abruzzo.

From the highest peaks of Gran Sasso, of Majella and of Velino to the golden coastline, the nature in Abruzzo makes a fascinating picture full of variety which is possible to appreciate in any moment of the year.

Gorges Salinello, a kind of canyon between the Twin Mountains, have been created over time by the erosive force of the water, the territory below the fortress of Civitella del Tronto.

You can risalirle walk or go down with the equipment to canyoning. The path to go on foot instead, part from Ripe village and on to a dirt road, made of ups and downs and signaled that he sees along the way the hermitage of Grotta Sant’Angelo, before arriving to the grooves and then go out to the sight of Castel Manfrino.

La Grotta di Sant’Angelo is known for the many archaeological finds of great historical interest, but also for being one of the mystical places in the area. Today you can visit it by agreeing with the Visitor Center Ripe. More information about: www.gransassolagapark.it 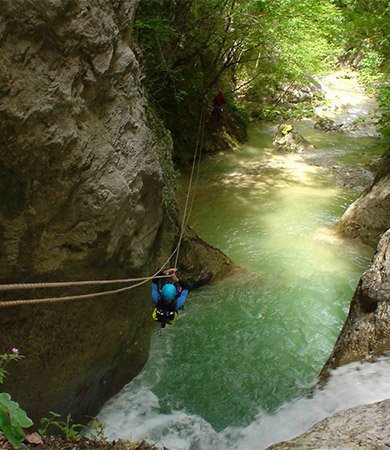 The way to discover the remains of Castel Manfrino part of Macchia da Sole, a small mountain town reached from Valle Castellana, from Ascoli and Garrufo of Campli, and proceeds to dirt trails, mule tracks, along a limestone wall.

Entered the dense forest, a short climb leads to the ruins of Castel Manfrino, which are accessed via a metal ladder.

From here the view is as suggestive as it is fascinating. From the ruins of the castle again until you get to a square equipped with picnic tables, from which then comes back with ease Path did in the first leg. More information about: www.gransassolagapark.it

Another route to do by car, starting from the coast of Alba Adriatica Teramo up to the hinterland is the one that crosses the Val Vibrata and get to the Monti della Laga.
Starting point will be the coastal town of Martinsicuro, interesting for its archaeological remains of Truentinum Castrum and the sixteenth of Charles V. sighting Tower

Next stop is recommended in the ancient village of Tortoreto Alto with its imposing clock tower and the town hall of the eighteenth century, and then cross the Val Vibrata and visit the villages of Colonnella, Controguerra, Corropoli and Sant’Omero, renowned centers for both the high presence of wine producers among the best in Abruzzo, both for some buildings of great historical and artistic interest, such as the Church of Santa Maria a Vico, the only monument to the front Mille, which has survived almost complete.

In a few kilometers we will reach later in Civitella del Tronto with its Bourbon Fortress, from where the view opens to the beautiful Ascoli Piceno. Going up towards San Giacomo there is a pass through San Vito (Valle Castellana), an abandoned village with Romanesque buildings. From the nearby Macchia da Sole, admiring the ruins of Castel Manfrino, they branch out several paths that enter in the Monti della Laga, of which the most workable is what leads to the Morricana waterfall. 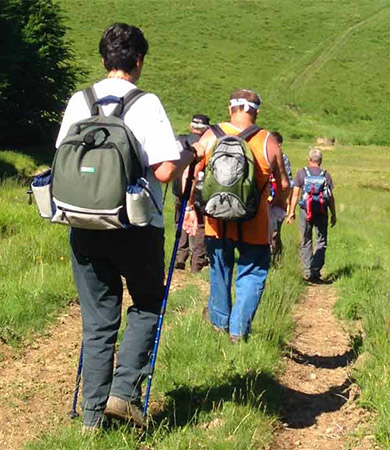 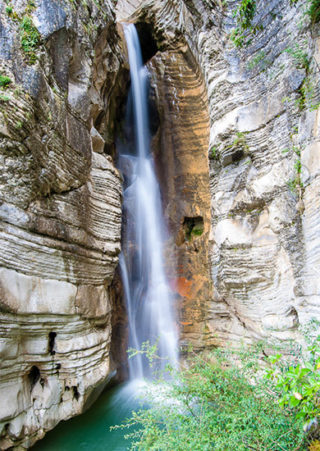 In the town of Tortoreto, it extends the nature reserve “Le Fonti del Vascello”, established in 1988, appealing to the natural environment, chosen by migratory birds as a stop and for the proliferation of the Mediterranean flora. The oasis is now open to visits and particularly curious nature walks for families, which is also allowed to organize picnics and be in close contact with nature and with animals.

The main trail runs along the lake and winds through ponds and smaller lakes, along which you can see all the details of flora and fauna. The area is home to many species of waterfowl, birds of prey, insects, reptiles and amphibians, as well as a family of deer and various species of land like badgers, weasels, martens, hedgehogs. The same wealth is found in the treated vegetation inside the botanical garden.

The “Sources Freighter” is an oasis of unspoiled nature, a short walk from Alba Adriatica coast. Info: www.oasiparcotortoreto.it

The Oasis of Cerrano is a marine protected area, located along the coast between Silvi and Pineto, a few kilometers from Alba Adriatica. It is dominated by an ancient and charming coastal tower dating back to ‘500, built at the behest of the Kingdom of Naples, which now houses one of the venues of the Biology Center of the Institute of Water Zooprofilattico and Molise (IZS A & M) .

The area was declared a protected area since 2009, but is open to the public to visit the Mediterranean garden, which surrounds it, and the Maritime Museum housed in the tower. The area of Cerrano is particularly lively in the summer, when they are organized botanical laboratories, archaeological and marine biology and guided tours, involving adults and especially children, who are sensitized to the respect and preservation of the environment, in a fun way .
Source: www.torredelcerrano.it 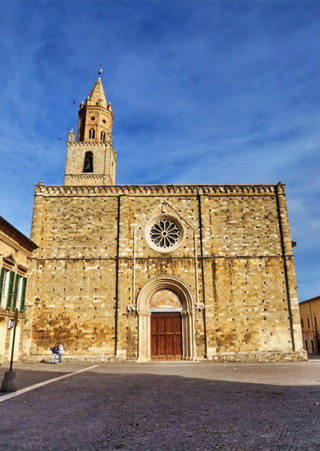 Atri is one of the art centers of Abruzzo, including in the area of ​​Cerrano area. Its historical center preserves impressive buildings, mansions and museums, making it one of the most interesting countries to visit in Teramo, and especially for the morphological characteristics of the territory on which it rests.

Atri is located on majestic Badlands, typical rock formation due to erosion, which in this part of Abruzzo is truly spectacular. The Regional Nature Reserve of the Badlands of Atri covers 380 hectares and, besides its nature, it is pervaded by several legends, such as that concerning the mysterious “stone of St. Paul”. Faith and myth come together around a white stone like a broken column, which tells whether the stone where he was martyred San Paolo in Rome, while more realistically is considered the rest of the pre-Christian altar.

The Reserve of the Badlands is a great place for hiking, trekking, horse riding and cycling on mountain bikes. Source: www.riservacalanchidiatri.it

Rocca Calascio is a fortress located in Abruzzo, in the province of L’Aquila, in the municipality of Calascio, at an altitude of 1450 meters above sea level, just above the town.

Recognized in the National Park of Gran Sasso and Monti della Laga, it is known for the presence of the castle, among the highest in Italy, and the ancient medieval village below, still inhabited by some inhabitants, considered one of the symbols of Abruzzo. 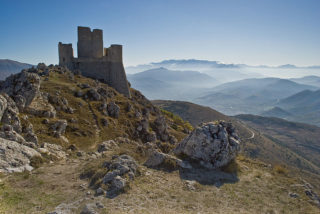 For more information, request a free estimate for your next beach holiday in Abruzzo or for any other request, please contact us at the following addresses and e-mail addresses.